Climate change has manifested in erratic weather patterns and significantly prolonged drought seasons in Southcentral Uganda. The drought hit the Lwengo region in one of Uganda’s cattle corridors particularly hard. Farmers in Lwengo have suffered serious losses over the dry season; their crops dried up and withered over the harvest period. Maise, beans, peas, and other cash crops have also done poorly during the dry planting season.

The water sources in most villages and part of the Kiyanja-Kaku wetland (a precious wetland conserved by the ICF/EWT projects) have dried up, and animals and households no longer have enough water to drink and use for domestic purposes. The dry season also affected irrigation projects, rendering irrigation impossible at the household level and reduced food security and the general well-being of the communities. The Kiyanja-Kaku wetland and its catchment also provide breeding and flocking habitat for the Endangered Grey Crowned Crane – one of Uganda’s iconic wetland species. 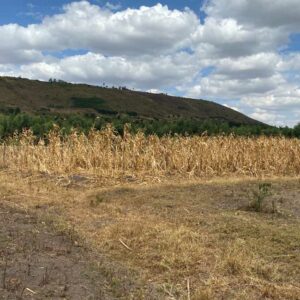 A dam shared by more than ten villages, also used for animals-the water is muddy and not safe for human and animal consumption 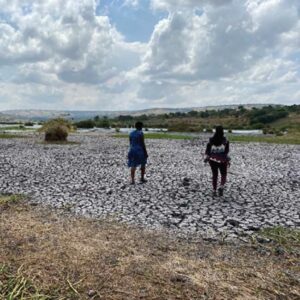 Unfortunately, cranes are eating more of the crops due to shortages in natural food sources, feeding on germinating seedlings and mature crops, eating all the corn, and leaving empty combs. The most affected crops in the area included maize, beans, and ground nuts. On top of the drought and deflating market prices, this has caused significant losses to the farmers, and they have resorted to poisoning cranes – 118 poisoned to date this season.

What are we doing to help communities weather the storm?

The measures range from the erection of human-mimicking scarecrows to the use of reflective materials, usually from non-recyclable waste products, around the crops. The measures have proven successful as there have since been no crane sightings in these areas, and crop damage has reduced to some extent.

Since the project has established an integrated approach of deterrent measures, effectively preventing cranes from damaging crops, we need to upscale the deterrent measures and extend the approach to all affected villages. This way, we will keep crops and cranes safe.

The project continues to engage farmers in establishing interventions that can also address the impacts of climate change on food security.

What are you looking for?